Born July 15, 1917 in Scarsdale, New York. Eaton attended Dartmouth College and played on their squash team before joining the US Army Air Force.

Assigned to the 7th Bomb Group, 22nd Bomb Squadron. Known as 'Fred' or 'Freddy' to his squadron mates. At 25 he was piloting a B-17E on his first combat mission of February 23, 1942. After their escape from the swamp, Eaton returned to combat, flying a total of 54 missions and 435 combat hours in the South Pacific theater thur the rest of 1942. He had other harrowing missions, like force landing an LB-30 at Milne Bay.

After the war, he worked for Sears Roebuck & Company. In the late 1980's he retired to Martha's Vineyard with his wife Peggy, and spent winters in South Carolina. Eaton passed away March 31, 1994. Wartime photo via Richard Gillespie, current photo via Mrs. Eaton. 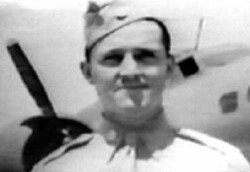 The following information on Frederick Eaton is gathered and extracted from military records. We have many documents and copies of documents, including military award documents. It is from these documents that we have found this information on Lt Col Eaton. These serviceman's records are nowhere near complete and we are always looking for more material. If you can help add to Frederick Eaton's military record please contact us.

Please contact us with any biographical data, pictures or other information regarding the service and life of Frederick Eaton.