After studying Mechanical Engineering at Texas A&M University from 1936 to 1939, he joined the U.S. Army in 1940 and went for pilot training to the Allen Hancock School of Aeronautics in Santa Maria, California. Eliminated from that class, he returned to Texas and got his commercial pilot's license in 1941. Before the U. S. entered the war, a contractor called The Clayton Knight Committee was recruiting pilots for the Royal Canadian Air Force. Emmet took a flight test and passed. The R.C.A.F. Extended him an invitation to come fly with them, and sent him a railway ticket to Canada. On December 7, 1941, he was on his way north. After the attack on Pearl Harbor, the Army somehow found him. Recalled to the service, he reported for Bombardier School at Houston's Ellington Field on December 10. In 1942, after finishing his bombardier training in Albuquerque at what is now Kirkland AFB, 2nd Lieutenant Cook went to England with the 301st Bomb Group, a B-17 unit that was one of the first to arrive. Along with the 97th Bomb Group, it was also the first to fly bombing missions over Europe. In November 1942, both Groups went to 12th Air Force in North Africa, which was commanded by Major General James H. "Jimmy" Doolittle. Emmet and his unit took part in Operation Torch and supported General George S. Patton in his battles with Field Marshall Erwin Rommel's Afrika Korps. "I was shot down on my 32nd mission, over Palermo, Sicily," Emmet said. "We were hit by flak between the number 2 engine and the fuselage and the fuel tank caught fire. I pulled the emergency release cable that was supposed to pull out the lower hatch door's hinge pins, but it wouldn't budge. I then released the regular latch and stood on the door, trying to use my weight to push it open and I got it open, but because of the force of the slipstream, it didn't open far enough for me to get out. At that moment, the wing burned off and the plane went into a spin. I was pinned against the deck and the plane exploded and I found myself out in the air. Five of the crew didn't make it out." He parachuted to a landing in a patch of cactus, and an Italian goat herder with a rifle detained him. After the Italians interrogated him, 1st Lieutenant Cook ended up in Stalag Luft 3, a Prisoner of War (POW) camp in German Silesia (now Poland). Everyone familiar with the "Great Escape" should recognize that name. When his fellow POW's learned that Emmet had studied Mechanical Engineering and knew "a little bit" of civil engineering, he was asked to help a Flight Lieutenant Brian Evans map the camp. Using a transit made from a protractor and a homemade sight, they set baselines and triangulated to measure distances ccurately. The POW's needed good maps so they could dig escape tunnels. Thanks to Emmet and Brian's painstaking surveys, the men knew their tunnels would have to be at least 280 feet long to reach the tree line of the surrounding forest. Improvising everything, the tunnel-diggers were amazingly ingenious. They used empty milk tins and a homemade bellows to blow air into the tunnels. With scrounged wiring, they installed electric lights. To get rid of the mine tailings, they sewed drawstring bags into their trouser legs. According to Emmet, "The penguins would walk around the camp letting out the tailings a little at a time. We had tons of that dirt to dispense." Emmet once tailed a German guard for days, covertly measuring the guard's rifle. A British officer made a German uniform and carved a fake rifle out of scrap lumber. "Every day the guard escorted prisoners out of camp for work details," Emmet related. "One day, while the prisoners distracted the guard, the British officer in his German uniform and carrying his wooden rifle, marched some prisoners out the front gates! Unfortunately, they were all soon caught and " In January 1944, Emmet and many other American prisoners were transferred to a new part of the Stalag Luft 3 compound. Just two months later, on March 24, the "Great Escape" took place from the original compound. "Except for an Allied air raid on Berlin on the night of the escape, which shut down all electricity including the lights in the tunnels, they would have emptied that compound," Emmet said. Flight Lieutenant Brian Evans was one of 76 POWs who escaped from Stalag Luft 3 on that dark night. All but three were soon recaptured. The infuriated Gestapo later murdered him and 49 others. Freed in April 1945, after two years, one month and 7 days as a POW, Emmet returned to Fort Worth and took a job with Globe Aircraft as a production test pilot for Globe Swifts. His is the first signature in the Airframe Log of War Eagles Swift, but that's no surprise, he said. "As with most all Swifts built in 1946 and 1947, that was all I did, every day. I flew this one again with Jack Bell, the museums Chief Pilot, 50 years after I first flew it." After Globe folded in 1947, Emmet delivered airplanes for Temco-Vought for a while. Then, figuring there were "too many pilots", he left flying for the heavy equipment business. In 1950, he took a sales job in El Paso with Hobbs Trailer Company. http://www.usmilitariaforum.com/forums/index.php?showtopic=6728 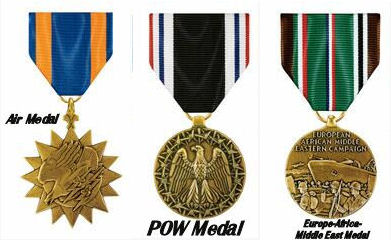 The following information on Emmet Cook is gathered and extracted from military records. We have many documents and copies of documents, including military award documents. It is from these documents that we have found this information on 1st Lt. Cook. These serviceman's records are nowhere near complete and we are always looking for more material. If you can help add to Emmet Cook's military record please contact us.

Please contact us with any biographical data, pictures or other information regarding the service and life of Emmet Cook.