My father, Roy T. Patterson, passed away in Feb. 1997. I spent many hours talking to him about his time overseas and his training.

My father entered the service and was sent for training to be a fighter pilot. He flew PT 21, BT 13 and AT 6 aircraft in that training, but did not complete the training and was then sent to gunner training. After this he was assigned to the bomber wing and sent to North Africa then to Italy.

Talking to him about his experiences there, he told me that he had flown on only 4 missions when his plane went down. That 4th mission was a single bombing mission and he was assigned to the top turrent gun with that crew because their gunner was sick. That plane was not his plane or regular crew. During the flight, one of the four engines quit. The tail gunner told the pilot that the engine was losing oil, but the pilot replied back that he would get it to restart. The pilot told the bombardier to find some kind of target and get rid of the bomb load, which he did. The pilot did not feather the engine and in a short time the engine seized up and the plane went into a spin. My father fell out of his turrent, down to the emergency exit below him, and kicked it open. He froze over it and the next thing he knew, he was kicked out by the Navigator, Harry Hillhouse. He said he guessed the planes altitude was at about 20,000 feet at that time. He thought the parachute would never open. He only had on his belly chute used for emergencies. This was the last contact he had with the plane or any of it's crew.

My father landed in an Austrian town in the middle of the road. Before he landed, he had tossed his 45 cal. pistol into the snowstorm. He was captured by a man with a shotgun (not a soldier), then placed into holding a place, 3'x3'x8', for a period of about 6 weeks. He traded all his personal effects for food that he did not get. A German soldier took him from that town to a train station. On the way to Frankfurt, two P51 fighters blew up the engine of the train. They then walked to Frankfurt. He went through interrogation there (do not know how long) then was shipped by train to Luft Stalag IV.

I do not remember how long he was there. At some time the Russian guns could be heard. The guards took the whole camp and started them marching to the west, not taking any food, water or supplies. This was in the middle of the winter. My father told me that after many days marching, some prisoners were falling out. The word was that if you fell out, the German guards would bayonet you, so that kept most going. He got bad sick, but a fellow prisoner fed him charcoal from a fire and that saved him.

After a long march they could hear the Allied guns. Some of the guards turned the prisoners back to the east and continued the march. Time passed, then they could here the Russian guns and were turned again. The Russians over ran them and liberated those that were left. Father said that the German guards gave their guns to the prisoners and wanted them to kill them, but the prisoners refused. I do not know the time frame of his time in the Luft Stalag or on the march, but it had to be 5 to 6 months. There is a book by Joseph D. Prain (HITLER"S PRISONER OF WAR) that gives great details about what these prisoners went through on this march.

My father then went to Camp Lucky Strike, France. From there he went to a freighter going to the USA. He said they were told that the ship was a freighter and all that went would have to ride on the outside deck across the ocean. He said he thought that the ship would sink because so many got aboard.

Thanks to Lt. Hillhouse kicking my father out of the B17, we had many years to enjoy and love him. If not for him my brother and I would not exist. 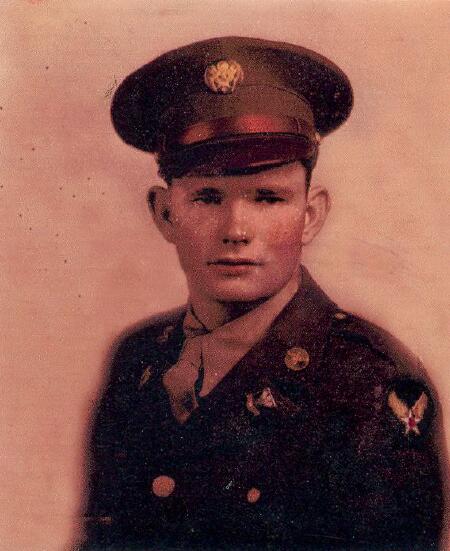 Please contact us with any biographical data, pictures or other information regarding the service and life of Roy Patterson.