"My father James Lewis Tyree (who went by the middle name Lewis or sometimes Louie) went first to Ellington Field in the Preflight Bombardier class. He then was in ClassBZ 43-6 Advanced Bombardier Training. I have a panorama picture of that graduating class, entitled "Class of 43-6 AAF Bombardier School Big Spring Texas.: It is about 40" by 8", framed behind glass, and I have no idea how to copy it. Unfortunately, I don't have the names - it is a large class. Additional Military Education listed (no dates given) is MAAF, Midland Texas Bombardier Refresher Course; Boca Raton AAF, Florida Course 76-Radar Observer-Bombardier; and SHAAF Salina Kansas- Personnel Mgmt course.

The DD-214 lists a Radar Refresher Course Feb 1951 at Ellington AFB, Texas and Combat Crew Training at Randolph AFB, Texas from March 1951 to May 1952. He separated from the service September 13, 1953 at Limestone AFB, Maine with the rank of Captain in the Air Reserve. He remained in the Air Force Reserves until retirement on August 5, 1975 (his 60th birthday) with the rank of Major. He passed away on September 9, 1997 and was given a military funeral. He was buried in his beloved Air Force uniform."

According to an article Grand Daddy wrote in The Security Searchlight, he wrote that In the fall of 1943, a group of us went to Casa Blanca in Liberty ships. Shortly we flew to Tunis and my crew joined an outfit stationed just out of Tunisia. I flew a few missions out of North Africa with the 301st Bombardment Group, a B-17 outfit, best in the then 12th Air Force (later the 15th). Just before Christmas, we moved to southern Italy, near Foggia. I completed my tour out of Foggia except for a brief stay with the radar lead ships. There I led my own outfit on many missions, including the Ploesti oil field raids. Completing my tour, I returned to the good ole USA in the fall of 1944. I did go back for a few weeks later, but to no more combat." 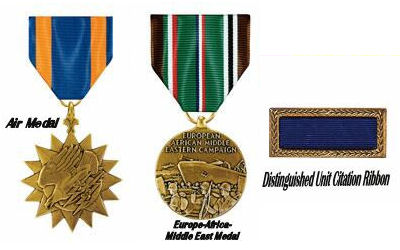 The following information on James Tyree is gathered and extracted from military records. We have many documents and copies of documents, including military award documents. It is from these documents that we have found this information on 2nd Lt. Tyree. These serviceman's records are nowhere near complete and we are always looking for more material. If you can help add to James Tyree's military record please contact us.

Please contact us with any biographical data, pictures or other information regarding the service and life of James Tyree.