My name is Adam Fajfer and I am an eyewitness to the event, which took place in Poland on 17th of December 1944. With my grandfather as a child. I watched a US aircraft shot down by the Germans and the further escape of the American crew. One of the pilots parachuted near to our home in Jawiszowice. My grandfather offered him shelter and help. However, the airman informed us about the threat of danger from the Germans. Still, he asked us to burn his documents, provide some civilian clothes and to show him the direction of the approaching Russians. We did not manage to know his full name, but we suppose that it was Chester Janiak. However he left us the military bag signed with the name of another American soldier, which we kept in memory of him.

December 17 this year (2014), in Jawiszowice, with representatives from the National Security Bureau and the US Consulate General in Krakow, a ceremony commemorating the 70th anniversary of the downing of a US B-17 bomber.

As a result of this tragedy killed Sgt. Alvin J. Ellin, eight US Air Force airmen got into German captivity, one rescued residents Jawiszowice. Although Sgt. Ellin was identified as early as the day of death, it dedicated a monument to him was defined as "unknown American aviator."

The program provides occasional speeches ceremony, wreaths and submitting a photo participants of the ceremony. American delegation was chaired by Consul Andrew Caruso. Head of the National Security Bureau was represented by Maj. res. Maciej Czulicki. The ceremony was also attended by Cecilia ?lusarczyk Brzeszcz Mayor, City Council Chairman Richard Foks Brzeszczach with councilors, Vice-President of the Malopolska Regional Assembly Zdzislaw Philip, county councilors and member of the Board of the District Auschwitz Pawlusiak Eve, a representative of the Office of the Parliamentary Members of the Polish Parliament, in the person of Beata Awl Magdalene SZCZERBOWSKI , color guards, veterans, representatives of social organizations, students and residents Jawiszowice.

After the official part of the cemetery, Consul Andrew Caruso met with a nearby elementary school students, who every day take care of the monument Aviator.

Also we would like to inform you that on the 70th anniversary of this event, community of Jawiszowice renewed the monument at the local cemetery, commemorating the only shot airman from the crew B-17G-35-BO St. Francis – Aviator Alvin J. Ellin (link to information about the ceremony: http://brzeszcze.pl/70-rocznica-smierci-sierz-alvina-j-ellina-nieznanego-lotnika-amerykanskiego,7399). The ceremony of the American delegation was presided by the consul Andrew Caruso. 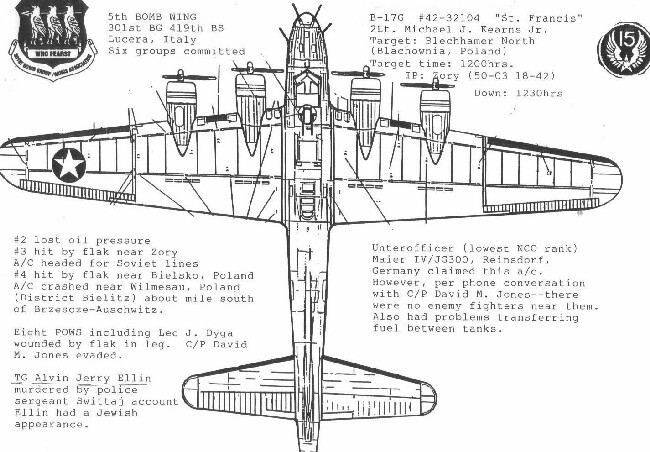