Remembering Bill Brainard, Sr., AIA West Palm Beach architect and past president of AIA Palm Beach Bill Brainard, AIA, has passed away at age 94. Bill entered the University of Florida in 1941 to study architecture. His education was interrupted by the onset of World War II with Bill joining the U.S. Army Air Corp. He served as a radio operator - gunner in B-17 bombers with the 15th AAF, 301st Bomber Group, 32nd Bomber Squadron, in Foggia, Italy. His aircraft was shot down over Austria on his 22nd mission resulting in Bill becoming a POW for the balance of the war. He was one of the 9000 plus prisoners of Stalag Luft IV until they were liberated at the end of the war. Bill returned to UF and graduated with his degree in architecture in 1951. He served the West Palm Beach community in an exemplary manner throughout his long career serving as Palm Beach County School Board Architect for a number of years as well operating a private architecture practice. He was predeceased by his son William W. Brainard, Jr, who passed in 2015. He is survived by his wife Rainey, of 64 years and his daughter Jamie as well as two grandchildren, many friends and respected colleagues. A beautiful service was conducted in his memory on August 22, 2016, by his long time friend and fellow architect Howarth L. “Hap” Lewis, Jr., FAIA (also a past president of AIA Palm Beach).

Bill Brainard of Florida, shown with his wife Rainey, was the radio operator of the B-17 'Laura' when it was shot down in July 1944. He has vivid memories of how he jumped through the bomb bay door just before the plane exploded.

Survivor tells harrowing tale of B-17 crash [5/25/09]A month after Allied forces landed on the shores of France in 1944 and began their push towards Berlin, Germany, American Forces launched bombing raids on airplane factories in Wiener Neodorf, Austria.

Bill Brainard, a radio operator on Laura, now of West Palm Springs Florida, recalls his memories of that day. The plane carried a crew of a 10, five of whom would perish, including the pilot Captain Leo J. MacDonald of Elgin.

Brainard's harrowing tale reminds us of the sacrifices made by many of our veterans.

"As a member of the 15th USAF, the 301st Bomb Group H, 32nd Squadron, I was assigned to be the radio operator on a make-up crew to take part in an air raid July 26,1944 on an aircraft engine factory in Wiener Neudorf, Austria. We would be flying in a B-17F serial No. 42 3157 with the name of 'Laura.' She was then commonly referred to as simply No. 157 in many records, by its crew and also by the men in the air control towers. Our air field and base of operation was located in the Italian town of Lucera, a neighbor of Foggia.

At the mission briefing, after breakfast at 4:30 a.m., we learned which plane we would be flying in and also that 1st Lt. Leo J. McDonald would be our pilot. Our co-pilot would be 2nd Lt. Kenneth B. Kai-Kee. Also on board were 2nd Lt. Thomas J. Steed as the Navigator, 2nd Lt. Richard C.Winsor as the Bombardier. The Engineer and top turret gunner would be T. Sgt. Johnny E. Allen.

After the briefing, GI trucks transported the crews and their flight gear to their particular plane. In general, each plane was deemed ready to fly, but the crews were to inspect their station and report any problems they might find to the ground crew chiefs standing by each plane. Prior to boarding the aircraft there was usually time for the flight crew to gather under one of the wings to have a little chat session -- ten minutes perhaps -- to get to know each other a little better.

Lt. McDonald led things off by introducing himself and telling us a little about his experiences flying similar type bombers in the Aleutian Islands combating the Japanese. I don't think all of us even knew that we were fighting in that battle zone. We were highly interested to learn of his flying experience finishing a tour of 50 missions or so. It gave us more confidence in his ability to fly.

Then, Bill Jameson started telling us that this mission we were headed out on would be his 51st and he had volunteered to go on it because he could go home afterward.

Soon thereafter we were in the air on our way to the target. Shortly after crossing the Austrian border at about 5 minutes to 11 a.m., I was scanning the skies off our left wing. Way out at 9 o'clock level coming out of the clouds I spotted con trails probably nine to 10 miles away. I notified the pilot right away over the interphone system which everyone would hear. He came back calmly, "I see them now; I hope they are our escort!" And, those were the last words that our makeup crew would hear from Leo.

I switched back to our base radio channel to pick up an 11 a.m. signal for my log but I was worried about that 'hope' word from Lt. McDonald so I switched back to the interphone just in time to hear the tail gunner yell, "They look like ME-109s; God (expletive) they are ME-109s!" And the machine guns started blurting their fury -- both ours and the enemy's.

I grabbed the radio gun and started firing at an echelon of six to eight German fighters that were sitting on our tail about 50 to 60 yards behind and above our turbulence. We could see the 109 guns six to eight mounted in the wings spitting bursts of fire with every tracer bullet they fired.

My gun only held about 75 to 100 rounds and they were getting low. It was also getting time to get the chute on. While reaching for my chute on the floor, the plane gave a quick lunge upward and the floor came up to meet my face. I was pinned to it for several seconds and when I could move again I glanced upward and noticed through the bomb bay door that the bomb bay was no longer there. Looking down I could see the front end of "Laura" headed earthward at a steep angle, engines still running it seemed. I looked to the rear and the tail too was missing and I could see none of the crew so I squatted on the door threshold, grabbed my knees and rolled out.

I delayed pulling the rip cord until I had gone way down stairs, perhaps to 1,000 feet. My chute opened gently and I was drifting in the direction I was facing. I happened to land on a farm's newly mowed field which was lucky for me because there were many trees nearby. It was a perfect landing.

They were all killed in action and we that lived often have to wonder, "Why them and not us?" 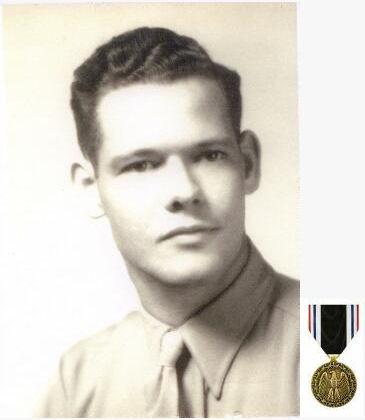 Needle in a Haystack PDF

RECOLLECTIONS NOW and THEN PDF

Please contact us with any biographical data, pictures or other information regarding the service and life of William Brainard.